Hot winds and dust kicked up in a field on the east side of town this week as Wichita State University students and their professor came face to face with a time machine – a mammoth tusk.

The verdict on how old that tusk might be is still out. Radiocarbon dating to determine its age could take a few more months, he said. 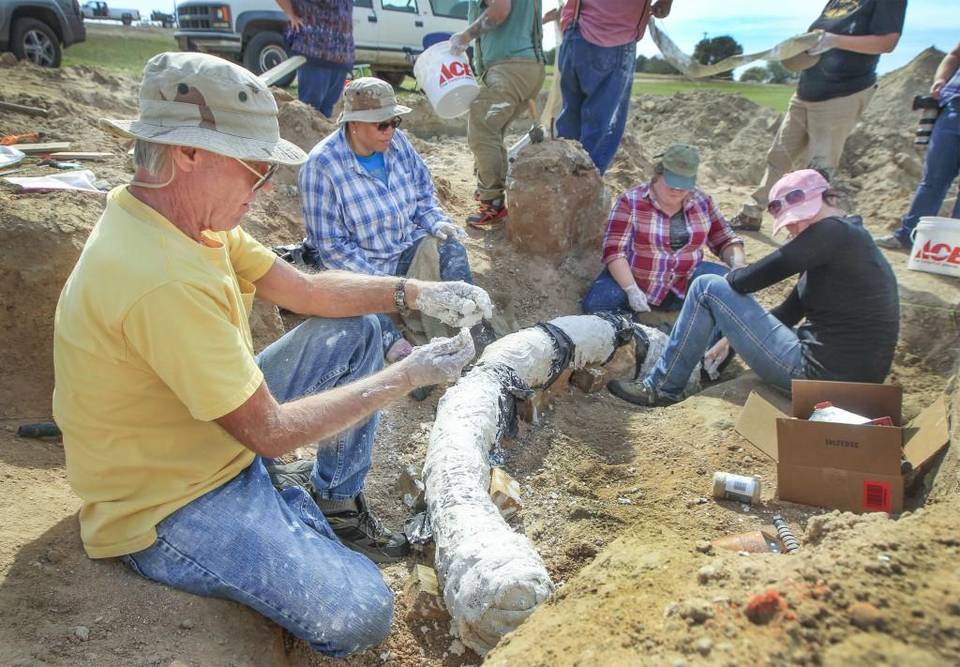 For now, Hughes and his anthropology students have two pieces of an 8-foot portion of the tusk safely back at the lab at WSU, where it will spend the next year getting cleaned and prepped for eventual display at  the Skyland Grain LLC in Cunningham, where it was found. As the tusk was being excavated Monday, a 6-and-a-half-foot portion weighing 300 pounds broke off, leaving a 2-foot section weighing about 75  pounds. Both pieces were retrieved.

The tusk was even longer when first discovered, but a piece of it broke off when some earth-moving equipment on a city sewer project uncovered it a few months ago.

The pieces will be fairly easy to reassemble, Hughes said.

“Anything to do with mammoths is pretty exciting,” said Emily Jones, a WSU graduate student in anthropology. “I always tell people it is really hard to explain the excitement of holding something that, in this case,  may be 50,000 years old.

“It is the most wonderful feeling in the world. I can’t imagine doing anything else in my life.”

This particular mammoth most likely died somewhere else and its body floated on a tributary of what could have been part of the paleo-Ninnescah River, Everhart said.

Hughes, from WSU, said there were other remains uncovered at the site, including a camel tooth, a horse tooth and a mammoth tooth, which may indicate an ice age graveyard. He thinks the teeth and tusk may be the beginning of more finds.

“I want to keep my eye on the area and where things might be likely spots,” Hughes said late Monday. “I want to be talking with other landowners and letting them know if they see something strange to invite us out and get information.

“Who knows what we will see in the future?”

This is not the first mammoth tusk to be uncovered in south-central Kansas. In 2005, Hughes was involved in excavating a tusk found during the highway expansion of Kellogg near Kellogg and Edgemoor. That tusk broke apart when it was excavated and has since been put back together. It is is on display at Exploration Place.

On Monday, Hughes said the mammoth tusk in Cunningham belonged to an animal that was probably about 15 to 20 years old and was about 12 feet tall.

It was discovered about 3 feet down in the sandy soil of Kingman County.

The excavation process involved bracing the tusk with two-by-fours and applying plaster of Paris wrapped in strips of burlap and Paleobond adhesive.