The Grand Challenges were an initiative launched by the US National Academy of Engineering (NAE). Fourteen ambitious goals were identified in 2008 by some of this generation’s leading technological thinkers and doers that are believed to be both achievable and necessary to help people and the planet survive. The NAE GRAND CHALLENGES FOR ENGINEERING — they include carbon sequestration, cybersecurity, health care, innovations in infrastructure as well as the education of the engineers who will take on such challenges. In a LETTER OF COMMITMENT presented to President Barack Obama in April 2015 more than 120 U.S. engineering schools announced plans to educate a new generation of engineers expressly equipped to tackle some of the most pressing issues facing society in the 21st century. Taylor's University was the first institution outside the USA to commit to meeting these challenges. Pleasingly, the National University of Singapore has now also signed up to meet these challenges. As a result of their commitment, Associate Prof Ir. Dr. Satesh Namasivayam, Deputy Dean of SOE, recently visited the National University of Singapore (NUS) to foster collaborations between both the two engineering schools. As he noted, "NUS has only recently launched its Grand Challenge (GC) Scholar Programme, and so this now offers an opportunity for us to collaborate in terms of student exchange and joint projects". During his visit Dr. Satesh met with Professor Chua, the Dean of Engineering faculty, as well as with Dr. Edwin, who is the champion of the GC Scholar Programme at NUS. 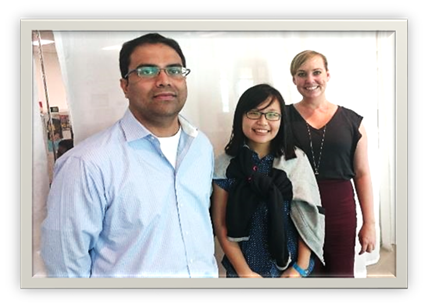 Dr. Satesh was also accompanied by a Taylor’s GC Scholar, Ms. Melanie Yong, who presented on the GC activities that have taken place at Taylor’s University. During their time at NUS, Dr. Satesh and Melanie also visited CREATE (Campus for Research Excellence and Technological Enterprise) where SMART’s (Singapore-MIT Alliance for Research and Technology) operations is located. They met up with Dr. Christina White, the Global Chair of the Grand Challenge Scholars Program Steering Committee, who was interested to hear about the GC activities taking place at Taylor’s University, and she plans to make a reciprocal visit Taylor’s University in the near future. The Assoc. Dean Int'l (ADI) for SOE Dr. Veena A. Doshi said, "Given that we are both absolutely committed to meeting the Grand Challenges, I see considerable opportunities for co-operation between NUS and Taylor's University on a range of different initiatives and projects. We look forward to continuing the conversation with them in the near future". To learn more about the Taylor's University School of Engineering click here.