The Taylor's University Student Chapter of the Pacific Asia Travel Association (PATA) - who are better known as the PATAns - recently hosted the 3rd PATA International Youth Forum (PIYF). This year, the 2-day event attracted over 86-students from around the Asian region, coming from institutions such as Lyceum of the Philippines University and Far Eastern University (The Philippines), Macau University of Science & Technology and the Institute for Tourism Studies (Macau), Dusit Thani College (Thailand) and Ton Duc Thang University (Vietnam). Following on from last year's successful PIYF'14 event with its theme of "Crisis Management", this year's theme was "Paint the Future of Tourism: 2045". The Opening Keynote speaker was Mr. Chris Flynn, the PATA Director for Australia and the Pacific. Given that this event was focused on developing scenarios for 30-years into the future, the Forum started by going back 30 years - to 1995. This was the year that the first of the "Back to the Future' films was released. While we don't yet have 'hover-boards', this film (along with Star Trek) made many accurate predictions about the technologies we are now familiar with and what the 'future' has ended-up looking like. Chris Flynn offered an engaging and optimistic view of the future of the world, and also for tourism.

But then arrived "Dr. Doom" (Professor Perry Hobson, the PVC for Global Engagement) who offered a much bleaker view of what might happen if the world and tourism continues on the path that it is currently on. Damage to the planet's environmental will cripple many coastal tourism destinations, and the over-crowding and destruction of tourist sites were predicted. Students were then split into groups and given some relevant insights into the future of Aviation, Infrastructure, Hotel, Attractions and Socio-cultural factors that would affect the development of tourism. Each group was made up of a mixture of the participating institutions so that we got a spread of ideas and perspectives, and they worked in teams to develop potential future scenarios. 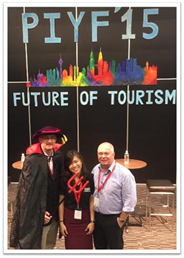 Dr. Toney Thomas said "I would like to thank Dato' Azizan, President of the PATA Malaysia Chapter and Deputy Chair of Tourism Malaysia and also Assoc. Prof. Dr. Mohamad Abdullah Hemdi from UiTM and representing Tourism Educators Association of Malaysia (TEAM) for coming to officiate at the opening ceremony of this year's event". Ms Madelyn Toh commented "Our PATAns did a great job co-ordinating the event, and each year we do this, the engagement between the students gets better – the energy created could easily power a small city". We were also pleased to welcome J.C Wong from PATA's head office in Bangkok, as she is an alumnus of Taylor's University. JC had worked on the PIYF'13 before doing an internship with PATA, and then getting a full-time job with them. To learn more about the tourism programmes at Taylor's University in the School of Hospitality, Tourism and Culinary Arts click here.