Taylor's University was pleased to host the “Young Southeast Asian Leaders Initiative” (YSALI) at the Lakeside Campus on Friday, 20th November 2015.  The event was an informal "Town Hall" forum held by US President Barrack Obama during his recent visit to Kuala Lumpur for the 2015 ASEAN and Related Summits. President Barack Obama wanted to share his views and engage with the future leaders of the region and have a more private and intimate discussion with students and pre-selected SE Asian student leaders who are part of the YSALI initiative. The YSALI Initiative was launched in 2013, and includes participants from all 10 ASEAN countries. The event was live-streamed by the White House, and is now available on You Tube. Professor Perry Hobson, PVC for Global Engagement, commented that "US Embassy officials initially approached Dr. Andy Nazarechuk, who heads up our ADP program, to host this event during the President's visit to Malaysia. As you might imagine this is not the sort of request that is made lightly and without careful consideration, and we were of course more than happy to oblige in helping the President and US Embassy in KL to host this event". The President has already held a limited number of these "Town Hall' style events with students in the past – including ones at the University of West Indies (Jamaica), the University of Johannesburg (South Africa)  and also the University of Malaya (Malaysia). 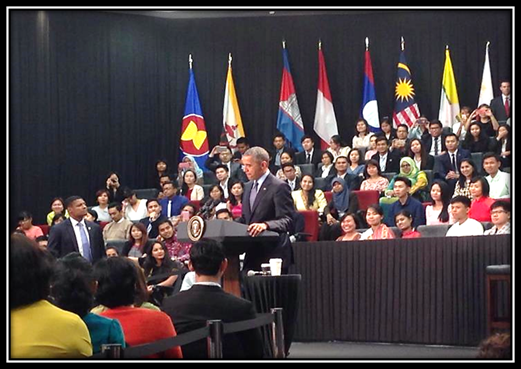